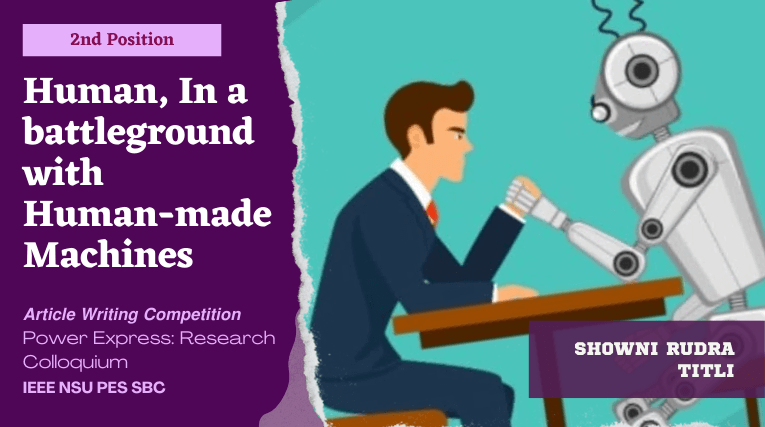 Artificial Intelligence (AI) most emerging technology human has invented. This algorithm-driven system has already spread to more than half of the world. Artificial intelligence amplified human effectiveness and threatened human autonomy,  agency, and capabilities in that manner that, now the debate started on; Can machines replace humans? Does Artificial intelligence take over human jobs?

The answer is this human-made system changing job patterns rather than eliminating jobs. Stared with minimizing hard-working job sectors, AI creates millions of new ones- which haven’t been invented yet.

Starting with a quote,

“When looms weave by themselves, man’s slavery will end.”

The experts predicted networked artificial intelligence would cause many professions to be automated in the next five to 10 years. The focus is on how machines could match or even outperform human intelligence and proficiency in categories including complex decision-making, understanding and acquiring knowledge, advanced analytics and pattern recognition, visual acuity, speaker identification, and language processing. In the area of artificial intelligence today,  the premise that, at its ideal, AI will supplement rather than replace humans has become a prevalent and influential narrative. Unfortunately, the changing world is also misguided with the tunnel view of Artificial intelligence. We must be more clear-eyed on this drawback if we adequately prepare for AI’s impact on society in the coming years. At AI’s most primitive level, this perspective keeps us, humans, in command, unquestioned, and without the need for deep, uncomfortable rethinkings about our position in the world. According to this line of logic, AI is just another instrument, like the motor or the electricity generator, that we have brilliantly designed to make our lives easier. In today’s world, while AI spreads far and wide in real-world contexts, too. The fear in humanslet the myth argument begin on a powerful note: job loss from automation is a frightening prospect. A question arises on that note that, how significant is the impact of the job?

According to the World Economic Forum’s “The Future of Jobs Report 2020”, AI is expected to replace 85 million jobs worldwide by 2025. Though that sounds scary,  the report says it will also create 97 million new jobs in that same timeframe[2]. Innovators, researchers, policymakers, and others stand to gain a lot by convincing others to believe — that AI would not replace, but rather enhance, people in the workplace. AI will change the work-frame analogue to advance, which causes many analog monologed jobs to be destroyed, but technological-based workplaces will be redefined with AI. Since Business intelligence (BI) is merging with AI, many changemakers believe that “AI is going to bring humans and machines closer together” [2]. Business leader Robin Bordoli narrates that, “It’s not about machines replacing humans, but machines augmenting humans. Humans and machines have different relative strengths and weaknesses, and it’s about the combination of these two that will allow human intents and business process to scale 10x, 100x, and beyond that in the coming years” [3]. We have to expect that we are going through a technological revolution with hands-on Artificial Intelligence. Every revolution gives and takes at the same time. The industrial revolution in England caused many job losses but created different kinds of jobs. Business Intelligence (BI), a section of artificial intelligence, has already connected marketers to worldwide customers. Before AI and after AI, there was a considerable change in business patterns. It does not just reach a large consumer market; it helps to global market ten times faster. The best sensible thing to survive unemployment is not to misguide ourselves with a one-sided view of AI. Wellcome the significant changes in job sectors, and plan for the long run.

In conclusion, AI will eventually replace jobs. From medical to manufacturing and agriculture, workers in many sectors may face employment disruptions due to AI. Still, it is not a risk towards human jobs because twice the time, larger job sectors will be created with Artificial intelligence, which has not been invented yet.

Future in the hands of Artificial Intelligence

IOT for Biomedical Systems and Applications

Volunteering with IEEE: “It’s an Emotion”